Holy wow, it’s been a long time since I posted! In my defense… I have no defense. Watching this show is mostly torture. Anyway, I heard Steve Burton was wandering around in a gimp mask, and obviously I am here for that, so… recap!

Michael forgot his watch at Nelle’s place and she’s brought it to his office. Nelle simpers that maybe he did it on purpose because subconsciously he wants to move in? I legitimately no longer care if she’s evil or not, this is so boring either way. 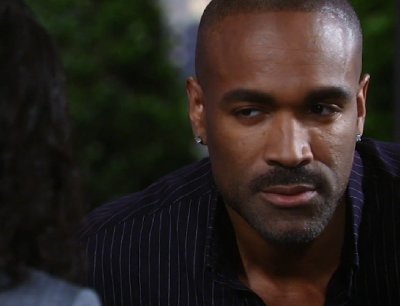 Jordan and Curtis are eating at the MetroCourt. She’s excited to have two weeks vacation in January and they begin bickering about whether to go skiing in the Alps or lounge on a beach in Fiji. I am ONE THOUSAND PERCENT Team Curtis on this one. No one who actually lives in upstate New York would pass up a tropical vacation in January.

Andre calls Dr. Least Convincing Russian Ever to warn him that Franco’s getting super close to figuring out the whole deal with Jason’s Morgan’s twin and Patient Six. Because apparently Andre is evil now? I’d be outraged, but on the scale of things to be upset about these days, minor character assassination barely registers.  Dr. Not Even Slightly Russian wants to meet with him, but Elizabeth brings Jake for an emergency consultation. 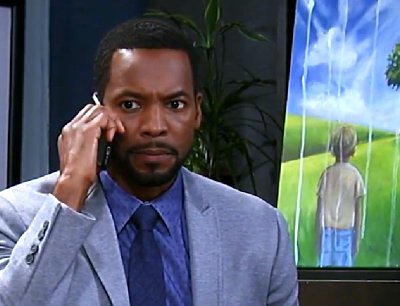 still boring, even while evil

Carly and Sonny chat about Jason and Sam’s new business venture, and how things are going to change after the launch party. Carly misses the good old days, when they could all be best friends committing crimes together. You know, as a family!

Ava finds Franco to thank him for inexplicably funding her daughter’s education, even though Ava could obviously afford it herself. Also, can someone explain how Kiki is going to medical school when she dropped out of undergrad? And while we’re on the subject, how the hell is Kristina dropping out of a master’s program when she never finished her bachelor’s? Is one month at PCU just the equivalent of  2 years at a regular school or something? 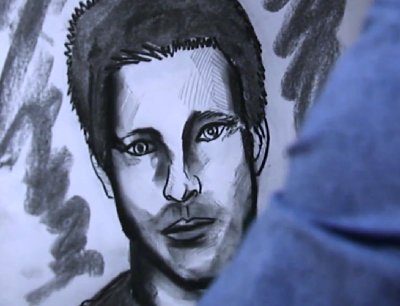 Meanwhile Patient Six — who may or may not be Andrew (but come on we all know he’s the real Jason, who are the writers even kidding) — breaks into one of Sonny’s safe houses. The alarm goes off, but he shuts it off with a code.

Liz and Jake are surprised to see Franco’s painting of him and Andrew in Andre’s office. I guess we’re now to assume Andre bought it to discourage Franco from looking into the mystery any further? At least that’s more believable than him actually thinking it was good art! 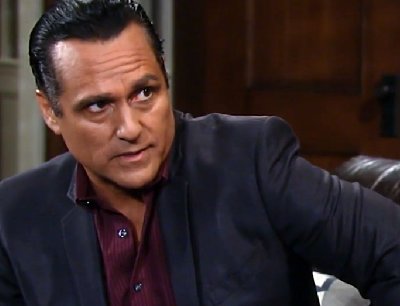 Sonny shows Carly the note from Jason and confirms she never heard the story of the $40 for a cab. (Side note: how expensive are cabs in Port Charles?!)

SONNY: It was after the Quartermaines brought Jason home from the hospital. Ned was playing at Luke’s club. AJ brought his girlfriend and Jason there, and Jason didn’t want to be there. So he flipped the table over and stormed out.
CARLY: You know it was probably AJ’s fault.
SONNY: Yeah.  But look, Jason was pretty volatile he hadn’t learned that trick  where he shuts down, gets cold.
CARLY: [sadly] He doesn’t do that anymore.

Remember when our friend was emotionally
constipated? I miss that

Jordan pretends it’s a hardship to spend two weeks in Fiji. SURE, JORDAN. But then she gets a text from Aunt Stella and takes off to go meet her. Curtis gets mystery text of his own and makes an “oh shit” face.

Nelle sucks up to Michael about how he understands her better than anyone she’s ever known, including her dead fiance! Michael is eating it up. He promises to think about moving in together.  Then she tells him she got surprise tickets to a show that night! Michael was going to go to Jason and Sam’s launch party, but Nelle puts up a big show of sadly offering to sell the tickets, and he caves immediately. Oh, Michael. Never change.

Sonny’s called Diana over to see if she can stop the phone taps. He’s still assuming it’s the feds. While they’re talking, Max calls with the news that someone broke into one of the safe houses and shut the alarms off with an old code.

Jordan finds Stella at the hospital. It seems one of Stella’s cases is a young undocumented woman who came in with a burst appendix and is now probably going to be deported. Unexpectedly topical!

Stella points out an ICE agent waiting in the lobby and asks Jordan for help. Jordan is sympathetic, but it’s a federal matter. After Stella challenges her, though, she marches over and lies that this girl is working for the police undercover to crack an opioid ring. The deportation order is revoked for now! Stella is reluctantly impressed.

I’d say this guy was over the top evil, but… you know

Curtis shows up at Michael’s office with news he just got about Nelle. Michael doesn’t want to hear it and they argue until Curtis finally drops the bomb that Nelle spent a year in a mental institution.

Meanwhile, Carly sees Nelle picking up lunch at the MetroCourt and actually manages to be civil until Nelle says she and Michael won’t be making it to the launch party that night. Carly assures her that Bobbie won’t be there, but Nelle smarms that Michael is the one insisting  they go to the city instead, and hints they’ve already moved in together.

Franco runs into Elizabeth and she tells him she’s worried about Jake’s sudden interest in his father’s old appearance. While Franco’s out, Ava sneaks back in to steal one of his Jason sketches.

As soon as Liz and Jake leave, Dr. Not Even Trying For a Russian Accent shows up at Andre’s office. Andre tells him Patient Six was watching Jake in the park and warns he could make contact with someone he knows any minute.

Speaking of: shaky cam follows Sonny into the safe house. He calls out for whoever’s there to show himself and Patient Six comes down the stairs! 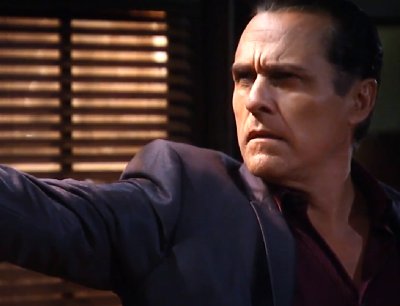 GASP. They’re both pointing their guns at each other. Jason is expressionless. Sonny squints in confusion. The greatest GH love story is back!

11 thoughts on “Reunited and it feels so… meh.”